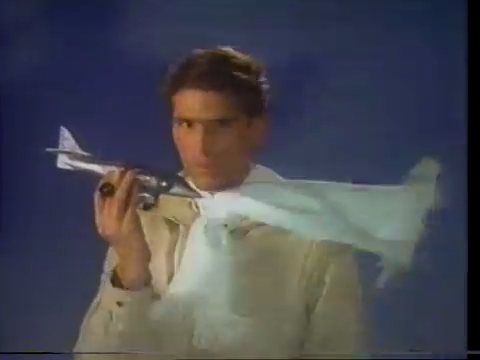 Calgary has always been a big small town, and these vintage videos prove it. Try to spot landmarks that are still standing, which is hard to do in this ever-changing city.

A mash up of several bars on Electric Avenue on June 14, 1986. Basically the funnest night of your life.

A man named Bill Hughes, architect, who is in his thirties (!) suggests to his family that they go on vacation to his old hometown of Calgary. You see, he moved away 15 years ago and since then he “acquired” a wife, a son and heir David, a dog and a mortgage. The mom cries, “Not New York?” His heir exclaims, “Not the lake?” Nope, he shakes his head. Obviously in this family dad always gets his way, and before they know it the family is in Cowtown enjoying all the sights. Highlights include:

1:01 — Calgary’s former mascot, which is a brown cartoon character shaped like province and wearing a cowboy hat.
1:39 — A gross hand-written message in a restaurant’s bathroom that says, “Please flush toilets only when necessary.” When is it not necessary?
2:40 — The dad’s parents show love through roast beef and corn. The colour grading on this video doesn’t do any favours for this meal. Regardless, David, the heir, digs right in!
4:42 — The most glamourous woman ever makes an appearance. It’s basically Calgary’s version of Zsa Zsa Gabor.
5:28 — Amazing mid-century homes!
7:18 — Grandma takes mom on an epic shopping trip. She buys a ten-gallon hat.
8:49 — Trip to Happy Valley, which looks amazing. Wish it was still around.
13:24 — Mom and dad go to a groovy nightclub, where they dance to “Tequila!”
15:35 — Mom flirts with a Mountie in Banff, and things get uncomfortable.
20:21 — They go to the “World’s Biggest Little Church” near Drumheller — it’s still irresistible.
20:28 — The heir digs up a calf skull and the mom’s reaction is Oscar quality.
22:49 — A bathing suit model at Calgary Stampede turns her head slowly, then the scene cuts to the family eating midway food furiously.

Driving around Calgary and seeing the sights. By 1972, the skyline was on its ways to becoming what it is now.

Could there be a more iconic time in Calgary’s recent history? Here’s the best of the best from the opening ceremonies at the ’88 Olympics. Keep your eyes peeled for the following highlights:

0:31 — Dancing dinosaurs.
1:22 — The Showband Mounted Patrol enters full speed. Goosebumps.
3:59 — Brian Orser leads Canada into the parade. Battle of the Brians begins!
5:20 — At what looks like the height (and near end) of fur in fashion, Governor General Jeanne Sauvé gives a speech. (Will do a deep dive into her fashion sense at a later date, promise.)
9:00 — A montage of happy people set against David Foster’s Winter Games theme “Can’t You Feel It?” which should definitely be remade if Calgary gets another Olympics.

“There’s a new look at Chinook,” and apparently it involves boas, brompers and lots of wind.