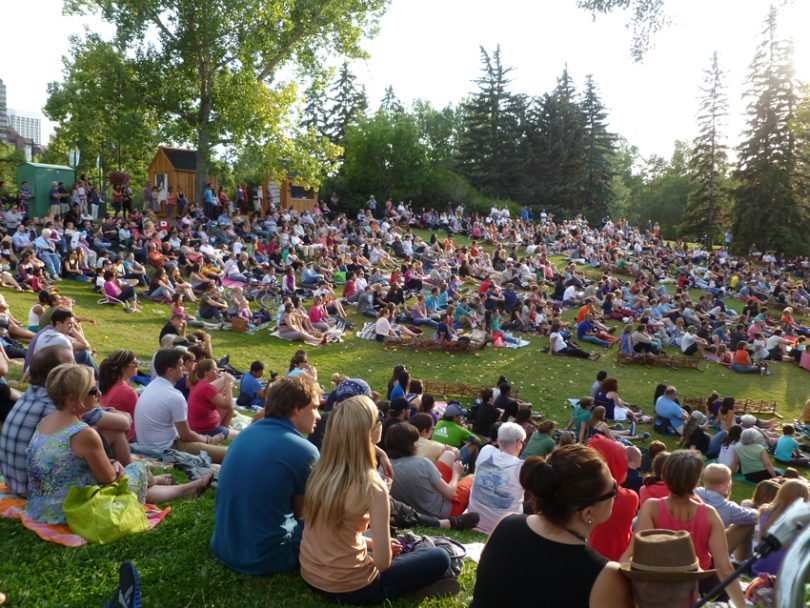 Shakespeare said it best: “Summer’s lease hath all too short a date.” With summer days fleeting, there’s no reason to hole up in a dark theatre for the latest blockbuster. Become a patron of the stage this season and make old Billy proud.

Suncor Stage One Festival of New Work at Lunchbox Theatre

The Suncor Stage One Festival of New Work kicked off its 30th anniversary with its first week of public workshopping of one-act plays. The festival continues for two more weeks with five more workshops available to attend. Scripts workshopped during the festival have the potential to be included in future programming at Lunchbox Theatre.

As You Like It at Shakespeare By The Bow

Celebrate the start of Theatre Calgary’s 50th year with the ever-popular Shakespeare By The Bow. Bring a picnic out to Prince’s Island Park this summer as Theatre Calgary presents the comedy As You Like It. This year’s stage is a giant modular ring, allowing it to wrap it’s way around the park environment as needed.

In & Out of Love at One Yellow Rabbit

Take a journey through the lens of love with One Yellow Rabbit’s In & Out of Love: A Listening Party To Watch. This performance of movement theatre set to the backdrop of music from City & Colour and Grimes will immerse you the moment you walk in the theatre. There will be a sing-along portion of the show which, according to featured performer Jamie Tognazzini, is a lot less corny than it sounds.

The Fringe Festival is a solid week of theatre with productions ranging from shows for kids to adults-only performances. Acts are picked by lottery so, as long as no one is breaking the law, anything goes! Don’t forget to buy a Fringe Button. The Button your annual membership to the festival and, even if you’ve got a ticket to the show, are mandatory to attend any Fringe shows or events.

The Phantom of the Opera at Southern Alberta Jubilee

Cameron Mackintosh’s production of Andrew Lloyd Webber’s The Phantom of the Opera retains all of the elements of the classic show with onstage imagery unmatched in a traveling production.
Associate producer and associate director Seth Sklar-Heyn recommends keeping an eye on the chandelier. “It comes to life at various moments at various moments and acts as an additional character in this production,” he says. “And, if you look carefully, you may see The Phantom in other places you never have before.”

Opera In the Village by Calgary Opera

Experience full-scale opera productions in the open-air with Opera in the Village. Introduce the entire family to opera with the one-act Cinderella or experience a classic in Rodgers & Hammerstein’s South Pacific. Programming also includes a And So It Goes — A Musical Review featuring Canadian baritone Brett Polegato at the mainstage on August 19.

West Side Story at Storybook Theatre

What will become of Maria’s forbidden love affair? Find out when Storybook Theatre mounts the best-known musicals of the 20th century. West Side will feature students from Storybook’s Student Summer Intensive program. A relaxed performance is scheduled for August 30 for audience members who might benefit from a more relaxed environment.

Murder for Two at Stage West

The only thing more engaging than dinner and a show? A murder mystery. Follow small-town policeman Marcus Moscowicz as mayhem ensues in this classic whodunit musical-comedy. Murder for Two has a roomful of characters but only two actors. Watch for fast costume and height changes and the use of props to propel the story.