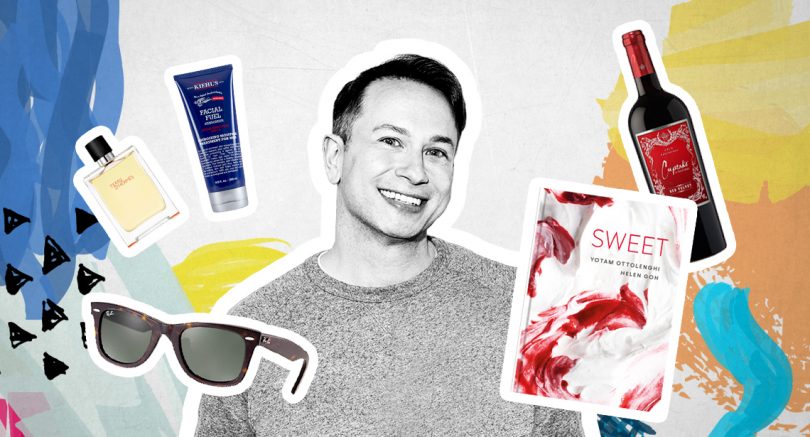 We at Vern Magazine are obsessed with finding out what products, possessions, and experiences make people tick. That’s why we’re asking some of our favourite people to list the ten things they can’t live without. Ricky Zayshley is Press + Post’s editorial director and one of the editors behind the scenes at Vern — he has a thing for cheap wine and expensive cologne.

I can’t live without perfume and cologne. Sometimes I’ll just wander the fragrance aisle at Sephora smelling everything to stay on top of what’s happening. Some have even called me a fragrance whisperer — but I digress. While I’ve always appreciated a whole range of scents, I don’t always love them on me. I have a few in rotation all year round (like Lime Basil Mandarin by Jo Malone and Acca Kappa White Moss), but my all-time personal favourite and the cologne I’ve consistently worn since it came out in 2006 is Terre d’Hermès. To me, it smells like over-ripe oranges and, as odd as that sounds, I get complimented every time I wear it.

I know my environmental footprint is a bit bigger because of it, but I absolutely adore my morning cup of Nespresso. It’s just the best cup of coffee you can have at home, and I’ll defend that earnestly to the naysayers. I usually stick to darker roasts like Arpeggio and run them long for an Americano. Of course, I drink my morning cup out of one of my boyfriend’s beautifully made pottery pieces.

It seems like everyone who does this sort of list picks a pen they can’t live without. Just so turns out, I have a favourite pen! It’s the Pilot G-2 07 in blue ink. My brother gave me a boxful one Christmas as a stocking stuffer because it’s his favourite pen, too, and I’ve used them ever since. They just write perfectly, dry quickly and they’re cheap!

As previously mentioned, I like a scent-filled life. I love to burn candles and incense, but part of my bedtime ritual is to load up my Muji diffuser with various essential oils and let it go while we sleep. The best thing about this diffuser is that it pumps out a lot of mist. There’s almost a hypnotic quality to it. My go-to blend is grapefruit, mandarin, bergamot and eucalyptus. Sounds weird, but it’s amazing!

This is the golden nugget here: if you like big red wine, you know, that jammy, Cab Sav-type stuff, Cupcake Red Velvet should be your table wine. Basically, anyone I’ve ever told about it turns up their nose and goes on about this wine or that wine they just found at their boutique wine store. My boyfriend is from France and we drink a glass almost every day, so buying expensive wine for that purpose is totally out of the question — it’s just not the French way! He and I will often splurge on a good bottle of wine when we eat out, but probably 50 percent of the time we’re disappointed because it’s not as good as Cupcake!

This might seem off-kilter, but a simple upgrade like swapping out your old, weird tea towels for these impeccably made ones from France really will improve your day-to-day life. They’re like mini works of art and they perform better than any other tea towel I’ve ever owned. And, like any heirloom-quality piece, they just get better with age. This is the type of thing you find in a flea market in Paris. Bonus, I encourage anyone to go to inspirati and take a look around. It’s a special store to have in Calgary and the staff is A+++.

I’ve worked in the fashion and beauty industries for several years and I’ve had the chance to try so many products, some great and some terrible (why did that one moisturizer peel off my face throughout the day??). I like being devoted to certain brands for certain things, like Levi’s for jeans and Lush for amazing smelling soap, so I’ve revisited an old favourite, Kiehl’s, for my day-to-day skincare and I have NO clue why I ever stopped using it. Facial Fuel SPF 15 is especially brilliant; and, as always (I’ve never stopped using it), their Lip Balm #1 is the best ever!

I have a serious thing about collecting cookbooks. I do all my fiction reading on my iPad — I just don’t care to have books pile up unless they’re first editions of my favourite authors — but I buy cookbooks all the time. They’re just so beautiful and, if they’re well written, I will read them like the latest page-turner. I’m slowly building up my Ottolenghi collection and I finally got to a couple of his restaurants while I was in London this summer. My next buy will be his Sweet cookbook, so I can try to recreate his insanely good cakes.

I don’t only collect cookbooks, I use them, too! There isn’t another small appliance in my kitchen that I use more often than my Kitchenaid stand mixer. I bought it years ago and it’s definitely built to last (mine weighs 30 pounds). I always avoided doughs and kneading because I thought it was so complicated and that you needed the right “touch,” but that’s a lie. It’s easy, you just need a stand mixer to do the work for you. I have the copper pearl one!

Ray-Ban is another one of those companies I’m loyal to. I just don’t think you can get more classic than their core lineup of Clubmasters, Aviators and Wayfarers. They try to reinvent these styles once in a while, but it’s no use. I’ve worn Wayfarers consistently for over 20 years now, and I’ll never stray. (BTW, the proper Wayfarer should smudge up against your cheekbones and tilt at an angle away from your forehead.)

Now that you’ve had a glimpse into Ricky’s mind, check out what’s on his summer reading list.

Do you know someone who would be perfect for this article? Email us an e-introduction!