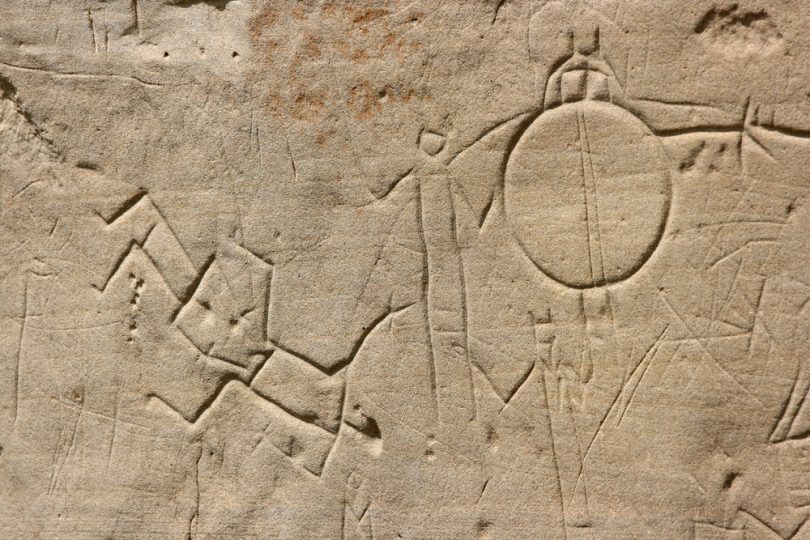 Being a nerd goes hand in hand with being a hiker, whether you’re choosing an over-engineered backpack or calculating your elevation gain. Still, some of us need a little something extra to geek about when exploring outdoors. Here are five hikes within a few hours of Calgary known for their historical, archaeological, paleontological, and/or geological significance. Get out there, you glorious nerds.

This region was, and is, sacred to the Blackfoot First Nation, whose people marked the rocks with petroglyphs (carvings) and pictographs (ochre paintings), some of which are hundreds of years old. The Hoodoo Trail is a 3.5-km interpretive hike along the murky waters of the Milk River. It takes you on a rock art gallery tour, of sorts, through prairie grassland and past endlessly photogenic hoodoos, where you can view the highest concentration of First Nation rock art on the North American plains.

Nerd bonus (anthropology): Over the years, visitors have added their own markings and graffiti to this historic and sacred site, because of course they have — look for the Model-T Ford, etched (one assumes) by a 20th-century proto-bro.

Canadian Badlands: Find the canyon a little less than two hours northeast of Calgary, just north of Drumheller on the Dinosaur Trail.

Pick your path along the loosely defined trails in this T-shaped hole in the prairie. The canyon’s undulating walls reveal millions of years of geological layers and its floor is covered with grasses, scrubby shrubs, and fragments of dinosaur bones. It’s a historical site too; long ago, livestock would disappear into the canyon and resurface with different brands — hence the name.

Nerd bonus (editorial style): Have fun nailing down the naming convention for this place — it’s called “Horsethief” in guidebooks and “Horse Thief” on the interpretive sign.

This steep trail up Cascade Mountain takes you past the ghostly ruins of the Bankhead mining operation: a concrete building, an airshaft, and a slack dump. The turnaround point of the 8-km round trip is more charming — a massive bowl dug into the mountainside by a melting glacier, with a startlingly blue alpine pond surrounded by rugged rocks. It makes a great picnic spot, where you can discuss the surrounding saxifraga and the scientific name for “fairy puke” lichen (it’s Icmadophila ericetorum).

Nerd bonus (politics): You will reasonably wonder why a dirty coal mining operation was allowed to run in a national park as recently as 100 years ago (the mine closed in 1922). We’re scratching our heads too.

Cypress Hills Interprovincial Park: Start at Fort Walsh on the south end of the park, which covers the southeast corner of Alberta and the southwest corner of Saskatchewan. It’s about five hours from Calgary, but that’s okay — Cypress Hills has beautiful campgrounds.

Hiking anywhere in Cypress Hills is a brain party for geology enthusiasts. Unlike the Rockies, these hills weren’t made from folding, faulting plates, but from sedimentary rock deposits, erosion, and time. Fort Walsh is a National Historic Site, and the 5-km Backcountry Trail loop leads you through pine trees and wildflowers to the Cypress Hills Massacre National Historic Site, which commemorates an ugly 1873 conflict between whisky traders, wolfers, Métis freighters and Assiniboine people.

A century ago American paleontologist Charles Dolittle Walcott found fossils of sea creatures in the mountains near Field, B.C. This discovery is known as the Burgess Shale, and what these deeply weird, half-billion-year-old fossils reveal about evolution is both astonishing and unsettling. Parks Canada and the Burgess Shale Geoscience Foundation each offer guided interpretive tours of the tough, steep 22-km round trip hike that takes you to the Walcott Quarry and back. What, you thought it would be easy? It’s a UNESCO World Heritage Site, you guys.

Nerd bonus (paleontology): Most fossils can be interpreted as “really old mammal” or “really old reptile or maybe bird who knows,” but not these critters. Several of the Burgess Shale specimens have no contemporary counterparts at all, such as Wiwaxia corrugata, which looks like a sentient wig.