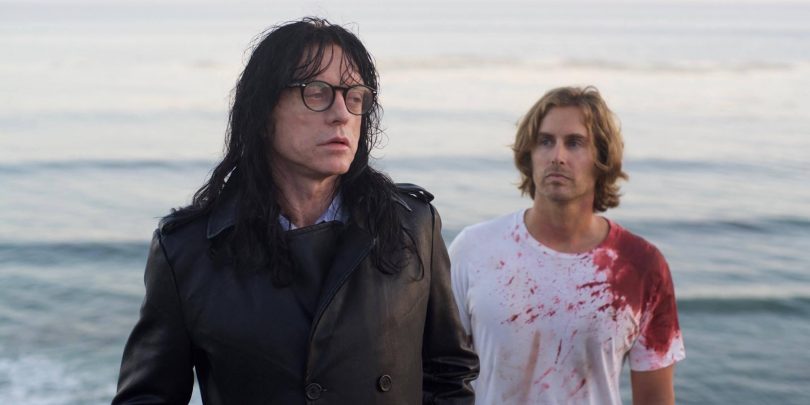 It’s been dubbed “the greatest bad movie ever made” and, nearly fifteen years after its release, The Room continues to shock and amaze cult film audiences the world around. For Greg Sestero, the film’s co-star and script supervisor, the wild ride that has taken him from the first day of Tommy Wiseau’s insane production and on to worldwide screenings of the movie was something he could never have anticipated.

Sestero will be helping the Fifth Reel round off its fifth-anniversary celebrations when he comes to the Globe Cinema November 29 with more content than you can throw a fistful of plastic spoons at. We caught up with Sestero to talk about what audiences can expect from a live-reading of The Room’s original script, unreleased behind-the-scenes footage from the production, a pre-release screening of his new project with Wiseau and what his memoir-turned-James-Franco-film, The Disaster Artist, means for the future of the cult classic.

Vern: Could you describe The Room for someone who has never seen the movie?

Greg Sestero: It’s really something that will take your breath away. And, depending on your sense of humour it can be an amazing thing or a terrifying thing. But, I think it’s really a cinematic experience unlike any other, that’s so insane that it’s still screening 15 years after it came out. So, I think it’s something you really should see just once to experience and, hopefully, experience it with an audience because that’s where it really comes alive.

V: Aside from Tommy, you were one of the few people that got to see the original script that you’ll be reading from at the Fifth Reel’s event.

GS: Yeah, I think I was the first one to read it — the original screenplay. It’s even more incredible than The Room itself. I wish he’d shot it exactly the way it was first written in that draft. There’s something about Tommy and the way he sees life, there’s this element of entertainment there. There’s so much comedy there.

V: Is there anything in particular about that original script that stuck out for you?

GS: It’s totally unfiltered. Everyone calls each other “best friends.” There’s laughter on every page and, I know The Room gets a lot of laughs, but this one is really kind of Tommy unfiltered.

V: I’ve heard that every character sounds like Tommy.

GS: Yeah, that’s one of the things I love about it. It’s like Tommy playing five parts.

V: What can we expect from your short documentary The Disaster Artist?

V: Audience members will also be getting a pre-release screening of your new movie Best F(r)iends. Can you tell us about that?

GS: Obviously, a lot of people would ask me if I would work with Tommy again. Really the answer was always no. Just because I felt like I had kind of done it, you know? So, when I got a chance to see a test-screening of The Disaster Artist, James Franco’s performance was so incredible and I got to see Tommy in a different light. It was more subjective and I finally kind of understood Tommy. All he wanted was to be accepted as an actor. I realized that Tommy had never been given that chance. He had cast himself in a role as a banker and really just miscast himself. So, I thought, what if Tommy was given a chance to play a role that actually really fit him. It was written seriously in a kind of noire setting where he could really shine and play a role. It was really a real treat to work with this time around. And it was crazy, of course. The one charming trait he kept was being late, but it was a really fun time to work with him this time and he really gives a great performance. And I mean that with sincerity. He really tried hard, he delivered.

V: Was shooting Best F(r)iends full of the same Tommy surprises that The Room involved?

GS: No, it was more enjoyable. This time there were definitely a lot of exploratory moments where you didn’t know if you were going to get something and there were certain scenes that took more time than others, but the effort was there and it was more cohesive. I think it’s something that, looking back, I have fond memories of making this film. The Room, Tommy was in charge of everything. Here, he was just an actor. So, you got to appreciate his bizarre charisma in a way that was more enjoyable.

V: Did he have any input on the creative decisions for the film?

GS: He offered some input. He rehearsed a lot. He offered to change some dialogue. But he was very respectful. I think he really did a great job and, like I said, I’m proud of his work and I’m glad that I gave him a second chance to do something.

V: What was your inspiration in putting him into the role of the mortician character in the film?

GS: There are multiple characters that Tommy has reminded me of over the years. The setting itself is based on a true story that happened in our friendship where we took a road trip in which he thought I was trying to pull a heist on him. Tommy has always fit a vampire, ageless, mad character and I thought, what if there was a character who has all that like Tommy, who has a big heart. So, I kind of gave him a chance to step into a part — not wear a wig or try to be a business guy — just let him tap into who he is and bring this character to life.

V: How do you think fans of The Room will react to Best F(r)iends?

GS: We’ve tested it in London and a few other countries and they really responded to it. It’s its own different beast. They said it does have it’s Room moments but it’s really its own beast.  I think they were surprised. In a good way. I’m excited to see how the Calgary audience receives it.

V: What impact do you think Franco’s Disaster Artist will have on The Room?

GS: I think it’s going to introduce the common-folk to The Room and to the phenomenon in a way that they would never enter otherwise. Because, if you turn on The Room, there’s these ten-minute sex scenes that no one in middle America is going to want to sit through. But if they get a chance to see these characters, what they were trying to do and ultimately what came about, I think it’s going to be a lot more interesting to enter that world.

V: How do you think it will affect long-time fans of The Room?

GS: I think it’s just going to bring a lot more attention to it, a lot more celebration. I think this is great for the original fans who supported it for 15 years — they were the OGs, so to speak — they’d go to the screenings years ago before anyone knew about it, they supported it. This is kind of a nod to them, to say “you guys were able to see something before anybody else was.”

Want to take in some innovative dance as well? Check out Velocity at DJD.