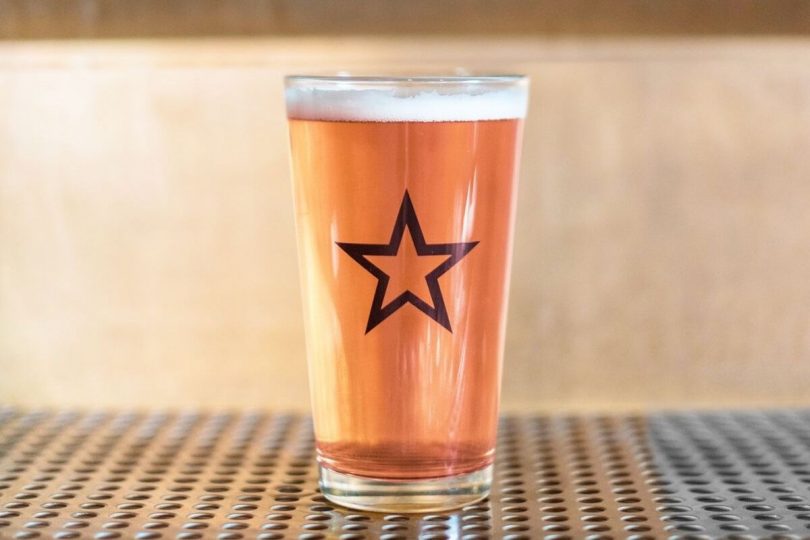 Calgary’s Annex Ale Project, Victoria BC’s Phillips Brewing and Malting Co., and local good times experts, National Beerhall, have teamed up for a “collabeeration” in support of Pink Shirt Day.  “Where It’s At”, a Cranberry New England Session Ale, will be available exclusively at all National locations as of February 1. We tracked down all parties involved to get the scoop on this new brew.

Whose idea was it to get this collaboration going?
CJ: I think it was Jeff’s and mine. We were sitting around drinking some beers and the idea came to us. I asked Andrew [Bullied] and he said, “yes.”
Jeff Boyle: The collab was actually dreamt up by CJ and the idea was, of course, hatched over a pint. National has always been a place where brewers from all over North America mingle, share ideas, and experience one another’s beers, so this project is sort of a natural extension of that.
Andrew Bullied: It was definitely CJ’s idea. He called me up one day and talked about how all these breweries are putting awesome collabs together and asked why National couldn’t be involved in the making of their own beer. He is the guy who put Annex and Phillips together, and I think deserves all the credit for this idea.

What was everyone’s contribution to the “Where It’s At” brewing process?
Justin Lockhart: “Where It’s At” is the first beer brewed in Alberta using barley from our on-site malting facility, the Phillips Maltworks (Western Canadian grain malted in-house by our resident maltster, Deebs). Nick, Phillips’ head brewer, worked with Andrew and the Annex team to come up with a style and recipe that was unique, interesting and hadn’t been tried before by either brewery. On brew day I flew out to Calgary and met everybody at Annex. We had a blast brewing the beer and I can’t wait to try the finished product!
Andrew Bullied: Annex also happened to have some cranberries we were dying to get into, so this pink cranberry New England session ale idea was basically us cramming everything together to make something delicious.
Christina Bramburger: We all brainstormed style ideas, but ultimately CJ and I let the brewers do what they do best and we provided the entertainment. CJ did have a good counter-clockwise stir going on for a bit, though.

Where was the beer actually brewed?
Andrew Bullied: We brewed the beer here at Annex using Phillips’ pale malt which they sent out. All three companies had hands in the brewing process and making it was a really fun day for all involved. We wanted a little bit of Alberta stuck in there too, so we used oats from Highwood Crossing, which is made just outside of town.

What is a New England Session Ale?
Justin Lockhart: A New England session ale is a slightly lower ABV style of ale similar to an IPA, but without the dry, piney bitterness found in West Coast-style IPAs. Instead, they tend to have a citrus/passion fruit/melon (and in our case, cranberry) flavour which is often described as “juicy.” Aromas are floral and fruity. The beer is fermented with a special yeast strain (Vermont Ale yeast) and is left intentionally hazy/cloudy giving it its distinct appearance and smooth mouthfeel.

Did you run into any obstacles along the way?
Andrew Bullied: So far the only obstacle has been dealing with the bitterness of the cranberries, but it’s going to add a very different and interesting flavour contribution to this beer.
Jeff Boyle: The entire process has been pretty smooth and really fun. The only painful moment was a morning creative session after the National Christmas party.
Christina Bramburger: It was a great brew day and an awesome party after! Jeff lost his keys in an uber, but we overcame that obstacle.

Where did the idea for the name and ’70s-influenced artwork come from?
Shawn O’Keefe: The name “Where It’s At” is literally a Beck song title and references the current trend of New England-style ales. The “two turntables and a microphone” portion of the graphic are lyrics from the song and the ’70s colour palette and fashion graphic is something of a riff on Beck’s style and art direction from that era of his musical portfolio.
Jeff Boyle: National, Phillips, and Annex all share a love for vinyl. The concept lent itself to two breweries with a similar beat mixing together and a partner establishment to help spread the good word. That concept quickly turned into two turntables and a microphone, which fermented into “Where It’s At!” The name touches on a mutual love for music, sharing of ideas, and enjoying a delicious brew.

How did you end up including Pink Shirt Day in this project?
Jeff Boyle: Craft beer is inherently about inclusion, collaboration and support. As early innovators in the Canadian craft beer community, those values have been central to the Phillips way of doing things since Day 1. We love to celebrate diversity while bringing more people under our craft beer tent and any opportunity to help support Pink Shirt Day is a welcome one.
Christina Bramburger: I’d like to think that part of National’s success is due to the fact that we have always remained humble and nurtured our partnerships within the craft beer scene and, more often than not, turned them into friendships. We are always excited to launch new beers and create and strengthen the bonds that we have with within the community. It was very important for us to be able to take an awesome, long-standing partner from Victoria, BC and introduce them to one of Calgary’s newest breweries and, together, create this amazing product. The fact that $1 from every pint sold goes toward the Pink Shirt Day campaign solidifies the friendship and the unity that National stands for.
Andrew Bullied: All three companies regularly preach inclusivity, so it was a cause we were all happy to get behind together!

What is your favourite thing about “Where It’s At?”
Andrew Bullied: My favourite thing about this collab is that I get to work with a bar and a brewery that I’ve loved through my entire career. We get to make a unique style and raise some money for an important cause. It’s been a huge thing for Annex, and we’re thrilled to be included in this.
Christina Bramburger: The plant poster [laughs]. That, and the group of humans who were all involved in this. We seriously couldn’t have asked for a better group of people. Let’s just say there weren’t a lot of serious moments. The talent and sarcasm on brewing day were off the charts, and I’m 98 per cent sure Jeff went home with a rash.
CJ: I loved the brew day — it was like we’d been brewing together for years.

The official Where It’s At launch party will be held on February 1st at National on 17th, where you can get your fill of “Where It’s At” pints at Happy Hour pricing all day long!