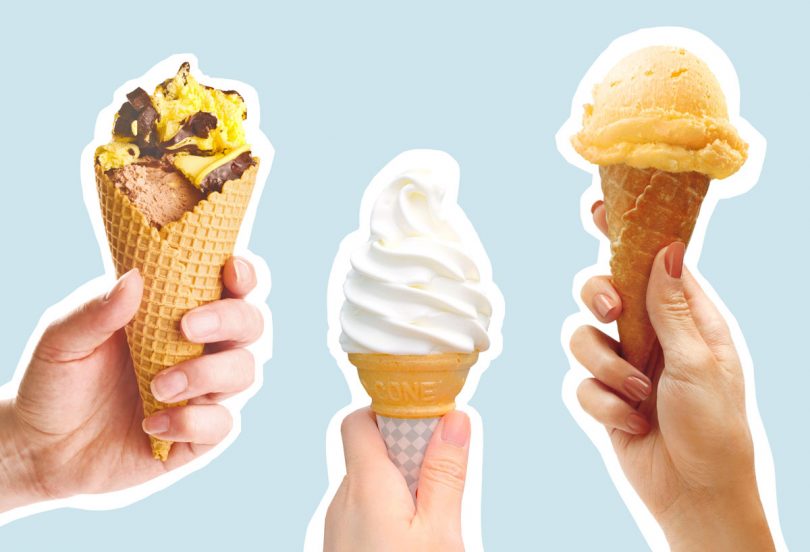 Ever gone to a restaurant, looked at a menu and noticed something that you consider more of a food-cart item being sold for three times the price? And then sat there wondering how much better a $20 hot dog can really be compared to a $6 one? Us too. That’s why we’re on a mission to find out the cold, hard truth. All summer long, we’ll be picking one kind of food and trying it at three different price points.

First up is our favourite summertime treat — ice cream! Summer’s on the way — this is going to be crucial info when that random +40 C hits.

This seems to be the end all be all of ice cream in Calgary. Every time we blink, there’s a new picture popping up on our Insta feed of their glorious cones and fancy sundaes. We got the Whisky Praline Hazelnut in a waffle cone and topped with a roasted marshmallow — this seemed like a classic cone based on what we’d seen on social media. The flavour tasted like Nutella (in other words, amazing) and the texture was creamy and not too hard, the marshmallow was giant and fresh, but the cone wasn’t as good as it could have been.

This is undoubtedly a YYC ice-cream staple. We went to the OG location in Marda Loop (there is a newer location in West Springs). Here, we tend to go for the Rolo Rolo flavour because it’s Rolo ice cream with entire pieces of mini Rolo — pretty self-explanatory decision. This was good but not next level; however, it’s hard to beat the fact that it has a lot of full candies in it. Did not opt for a waffle cone since I was still bitter about the last one, also none of the toppings got me excited.

This was surprisingly delicious. No choice for flavours, just vanilla, but this is not regular vanilla — it tastes like marshmallow delight (not the actual flavour, but that’s what it’d be called). Here’s a weird one though: this ice cream somehow doesn’t actually feel cold. We can’t explain it and it’s a bit puzzling, but let’s just say you won’t be at risk for brain freeze. We’re also pretty confident the cone is made of Corn Pops, which hold a spot that’s almost as close to our hearts as Cinnamon Toast Crunch.

They were all good! The actual ice cream part of Made by Marcus was definitely the best, but it’s hard to decide if you should pay 448% more for a fancy flavour, cone and topper. My Favourite Ice Cream Shoppe had great flavour, was creamy, and the scoop was giant, definitely one of the biggest single scoop we’ve ever seen, and perhaps that makes it the real winner here. If you’re looking to save money or just want a quick treat, you won’t be disappointed with McDonald’s. On the other hand, if you’re ready to splurge to get the full 9 yards, go for Made by Marcus. If you just want good old fashioned ice cream that just makes sense for size and quality to cost, get My Favourite Ice Cream Shoppe — there’s a reason that’s its name.