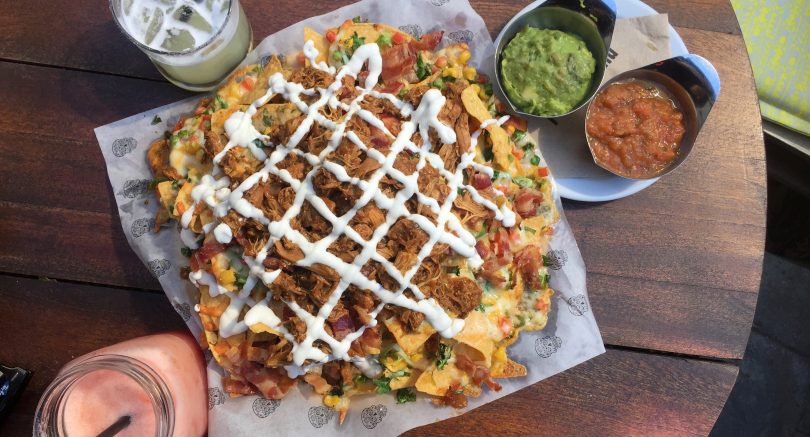 Ever gone to a restaurant, looked at a menu and noticed something that you consider more of a food-cart item being sold for three times the price? And then sat there wondering how much better a $20 hot dog can really be compared to a $6 one? Us too. That’s why we’re on a mission to find out the cold, hard truth. We’ll be picking one kind of food and trying it at three different price points.

Blanco Cantina hits the nail on the head with their nacho creation method. In short, they don’t create the nachos, you do! At this cute cantina style bar, you’ll get a nacho checklist that lets you choose your own adventure. Pick your size, toppings, meats and even add bonus toppings like an egg or queso, if that’s what you’re feeling. Don’t trust yourself with that much freedom? The list also has pre-made selections, that you can choose from instead. We don’t shy away from big decisions though, so we went for it with a personalized concoction.

Medium nachos with almost every veggie topping, pulled chicken, extra cheese and bacon rang in at $30 without tax or tip. That seemed pretty high to us until we realized that the nachos probably could comfortably feed 3 hungry people. On top of the massive size, these nachos automatically come with fresh pico and guac. The toppings were absolutely loaded on – we’re talking double layers of toppings which the extra cheese compliments very nicely, by the way – and the pulled chicken was not only heavenly, but also piled on generously. All these things made for one incredible pile of nachos that we are still reminiscing about on a daily basis, but what really sealed the deal? Not a single piece of the paper stuck to our chips or cheese even when we went for the really baked on parts.

Calgary’s – maybe even Canada’s – only craft nacho restaurant bakes up unique creations like Poke Nachos and Wild Mushroom and Truffle Nachos out of a very stylish space in Inglewood that has a really nice patio – a rare find in this historic neighbourhood. Our pick was the totally-out-of-the-ordinary ‘Korean Nachos’. Decked out in beef bulgogi, kimchi, gochujang mayo, mozzarella, green onions and a sunny egg, we see what they mean by craft nachos because we can’t recall seeing most of these toppings on any nachos before. These ran us 16 bucks without tax, but the tip is already included according to the menu and the servers.

At half the price of Blanco’s nachos, there is definitely less, but these are not small by any means; one regularly hungry person probably won’t finish the whole plate. The chips themselves were really tasty and have that super crispy, homemade feel that you hope to get whenever you order nachos, but it’s definitely the toppings that stand out. The flavour stood out because it was so unexpected! Madison’s does not skimp on any of the toppings, even the meat portion is good. What we really loved about this menu though, is that every time there’s meat in a dish, it can be subbed at no extra charge for one of two vegetarian options: pulled jackfruit and tofu, which is a jackpot if you have any picky vegetarian friends – or if you are one yourself.

Everyone knows the nachos we’re talking about- the ones that you loved when you were younger with the weird cheese sauce, but in hindsight, you don’t understand why you’d ever eaten them. The chips come prepacked in a little plastic container, and then you can add your own toppings, like cheese, chilli, and different veggies. In theory, this is a really great cheap nacho. In reality, it is probably the worst food item at the convenience store.

Pros: build it yourself; cons: every other part of it. We wanted to love them. Some of the low price points in this series end up being awesome, but there is nothing to love here. The cheese sauce tastes a bit like puke and the chilli makes you feel a bit like you’re about to get food poisoning (keep your fingers crossed for us), and there is no amount of free toppings that can make up for those two flaws. We hoped that the saving grace was going to be the chips, but not even they were good. The chips went soggy in about 3 seconds flat. We threw them out after three bites, as much as we hoped we’d like them.

Overall, it’s definitely a little bit tough to choose a winner. The loser is obvious; we’d say to avoid the 7 Eleven nachos at every cost. They really aren’t even worth the cheap price of four bucks. Blanco’s were top notch and while they may have cost over 30 dollars, these could easily feed three or four people, so the bang for your buck is definitely up there. It’s also awesome to be able to build your own or choose from a selection. The topping choices are also top notch and it comes with guac which is definitely a nice bonus. On the other hand, if you’re looking for something really unique and want to try something new and unusual, Madison’s is definitely the spot. The nachos were incredible, there’s no doubt about it. We were also huge fans of the fact that it was so easy to make these vegetarian, which is huge when you don’t have to pay extra and you get two choices for your substitute. You can’t go wrong with the medium and high price points, we loved them both!