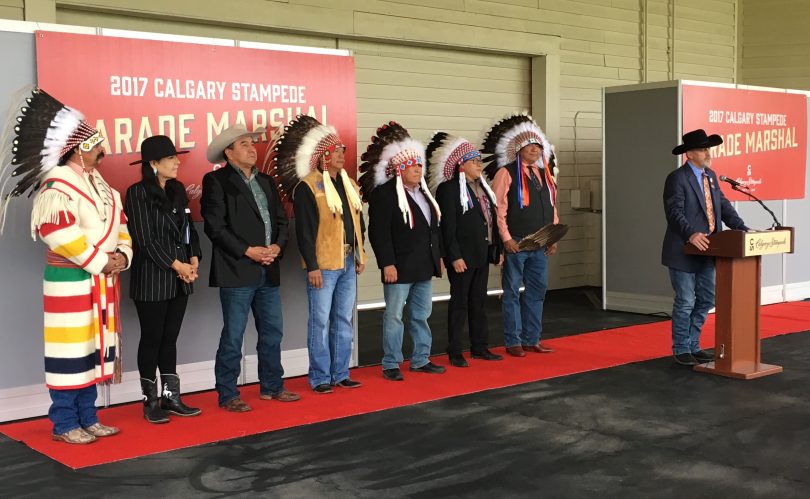 It’s been 28 years since the chiefs of the Treaty 7 Nations headed the Calgary Stampede parade, and we are so excited to see them lead the festivities once again.

For the second time in the history of Cowtown’s favourite party, the Treaty 7 Nations chiefs will be the Calgary Stampede parade marshals. The Stampede’s decision to select the seven chiefs acknowledges the role southern Alberta’s indigenous people have played in shaping both The Greatest Show on Earth, and in enriching Calgary’s culture. The first year the Treaty 7 Nations chiefs were designated as the Stampede parade marshals was in 1989.

“We have had a strong relationship since the beginning of this great festival, and we would like to build on that relationship going forward, making our connection even stronger,” says David Sibbald, president and chairman of the board at the Calgary Stampede.

The relationship existing between the nations of Treaty 7 and the Stampede dates back 105 years ago when Guy Weadick — the festival’s founder — asked that First Nations play a role in the celebration.
Roughly 1,800 indigenous people lead the inaugural Calgary Stampede in 1912, competing in the rodeo and camping in the first informal Indian Village — now recognized as the Old Stampede Powwow Grounds.

“The Stampede is a community gathering place and it is important that we preserve, protect and grow the home fires of our western heritage,” says Sibbald.

This year’s parade takes place on July 7, 2017, and starts at 9 am. The twist is, the direction is reversed this year, so click here to check out the route and learn more.