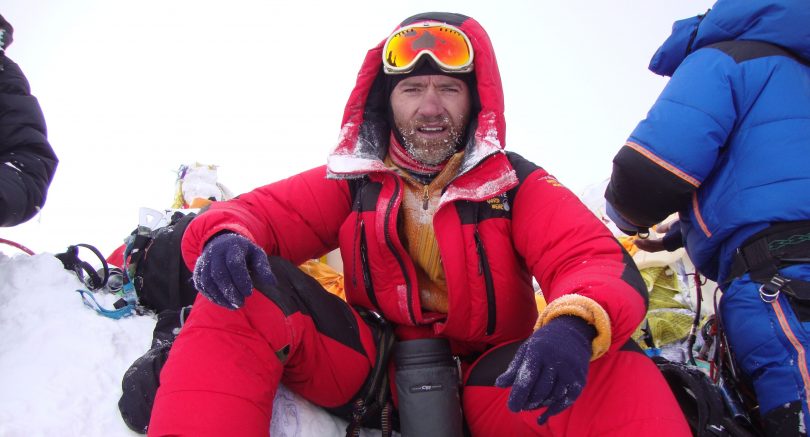 It’s no secret Calgary is home to some interesting people — we are perfectly situated at the foothills of the Rockies, where cowboys and mountaineers collide with Wild West flair. But there is one person who quite possibly deserves the title of Calgary’s Most Interesting Man. And that’s Laval St. Germain.

By day, he’s an airline pilot, but in his free time, Laval does stuff like summit Mount Everest without supplied oxygen or row across the Atlantic Ocean (in Canadian record time). Next month, he’s off to Antarctica, where he will climb Mount Vinson after a two-month solo ski to the South Pole. With this feat, Laval will have summited the highest peaks on all seven continents.

The Time I… Realized I was going to lose a finger.
Two hours above high camp on summit day on Everest at about 1 AM. It was actually 3 fingers, but who’s counting?

The Time I… Was blown away by the view.
Too many places where this has happened: Sunrise over Tibet from high on Everest, evening light along the Dempster Highway in Yukon on a cycling trip, dozens of dolphins leaping and twisting around my boat on what was a lonely day on the Atlantic, the aurora borealis from the cockpit at 37,000 feet — all pretty blown away-ish views!

The Time I… Wanted to quit but didn’t.
Too many times to count, we all have to dig deep, and sometimes very deep, when life gets hard. Two notable memories for me: Close to my limit from exhaustion descending Everest and being saved from stopping by seeing a dead Canadian climber lying in the snow, and a storm that lasted 4 days in the North Atlantic where I feared my boat would be crushed by the crashing waves.

The Time I… Skied down Iraq’s highest peak.
Awesome to ski steep snow along the Iraq/Iran border after skiing across fields of landmines and past abandoned machine gun nests, all the while feeling completely at home on snow in this ancient landscape. I loved it until the Iraqi security forces got me — long story.

The Time I… Ignored the skeptics.
My specialty! See all of the above. People are good at telling you why you can’t, they can’t or why you shouldn’t.

Want to hear Laval share some of his adventure stories in-person? You could win tickets to the sold-out An Evening with Laval St. Germain, Calgary’s Most Interesting Man hosted by Battistella Developments on November 1. Just visit their Facebook and Instagram pages for special contest posts featuring Laval.

If luck isn’t on your side, you can catch a livestream of the evening on November 1 at 6 PM on Battistella’s Facebook or Instagram.