It’s clear that Sir Elton John has excellent taste when it comes to aesthetics — the legendary Rocketman has worn some pretty iconic outfits, from the bedazzled Los Angeles Dodgers uniform to the elaborate pastiche of royal 18th-century garb he wore to his 50th birthday celebration — so it should come as no surprise that John and his partner David Furnish have translated that taste into a truly impressive contemporary art collection over the years. While his passion for photography is clear — his personal collection includes more than 7,000 photographs, 200 of which were shown at Tate Modern in 2016 — John is also a collector of glass art. In 2016 he told The Guardian’s Sean O’Hagan that he considered glass to be “the last great underrated area of creativity.”

Perhaps that’s why he was drawn to the work of Calgary artist Phillip Bandura. During John’s last visit to Calgary in 2011, he purchased 12 works by Bandura’s art collective, Bee Kingdom Glass, four of which were created specifically by Bandura. This purchase included one of a collection of “Gay Bombs” created by the artist as a part of his grad installation at the Alberta College of Art + Design (now the Alberta University of the Arts) in 2010. 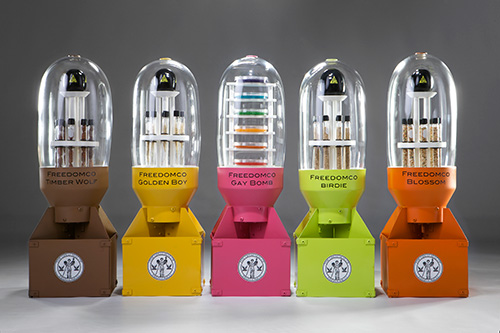 So why are we only hearing about this Calgary connection to the star’s collection now?

“I get so passionate telling people about the inspiration behind each piece that I’ve been told I have a tendency to ‘bury the lead,'” says Bandura with a laugh. “I finish going through the insane story that sparked the idea for the ‘Gay Bomb’ and drop my own gay bomb of sorts when I gloss over the fact that Elton John owns my art. People are always blown away.”

And while Bandura is excited by the fact that his art sits somewhere in John’s home, it’s hard to blame him for burying the lead when it comes to his “Gay Bomb” series. Bandura borrowed the concept of a “gay bomb” from a stranger-than-fiction proposal by the United States Air Force in 1994 to create a chemical weapon that could be dropped on enemy troops to make them “sexually irresistible to each other.”

“I found out about the gay bomb when researching ideas for a show Bee Kingdom was creating at the time called ‘Soft Power,'” says Bandura. Soft power is a political term used to explain a country’s cultural attraction and influence. “When I thought of this concept, the first thing that came into my mind was non-violent weapons and after a Google search, I read about the bomb. I knew I had to make my own.” 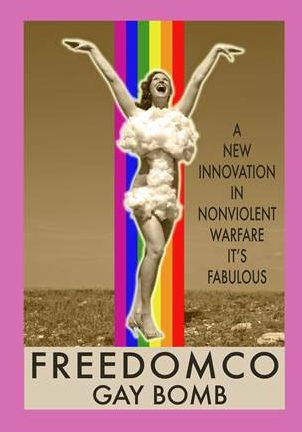 FreedomCo is the fictitious company Bandura created as a part of his grad installation at the Alberta College of Art + Design in 2010.

Bandura created just five of his “Gay Bomb”— John purchased number two —  and only one remains in his possession. For now, at least. Bandura has committed the final piece — number three of the collection — to help the End of the Rainbow Foundation raise funds in support of Calgary Rainbow Railroad Station (YYCRR Station), a partnership project that assists refugees, persecuted in their home countries due to being LGBTQ+, to settle in Calgary after they have fled unsafe countries.

He says donating the “Gay Bomb” is just one way he could do his part in supporting LGBTQ+ refugees settle in Canada. “As a gay man, I feel very lucky that I was born in Canada and have all of the freedoms and liberties that we enjoy, but it upsets me greatly to think of being in the situation where I couldn’t be who I am or have to worry about my personal safety and personal safety of the people I love.” 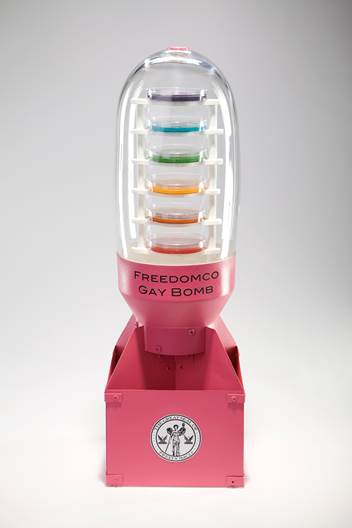 Bandura has donated “Gay Bomb” number three of five to support the End of the Rainbow Foundation’s fundraising efforts.

“The Foundation is excited to receive this generous donation from Bee Kingdom,” says Kelly Ernst, the End of the Rainbow Foundation’s President. “The unique history of the piece is sure to make it the focal point of one generous Calgary Rainbow Railroad Station supporter’s collection and the proceeds raised will support LGBTQ+ refugees starting anew in the city.”

The “Gay Bomb” will be given away to one identified supporter of the YYCRR Station at the end of November as a part of the End of the Rainbow Foundation’s fundraising efforts. The Foundation, a not-for-profit charitable private foundation dedicated to improving socio-economic conditions for people of diverse sexual orientations and gender identities or expressions, will be hosting their Pride Patio Party on August 26 where the “Gay Bomb” will be on display.

Full details about the Foundation’s “Gay Bomb” giveaway can be found here. Tickets for the Pride Patio Party can be reserved here. Entry is by donation.

Want to watch Bee Kingdom in action? Check them out as they prepared for their show Tuponia.