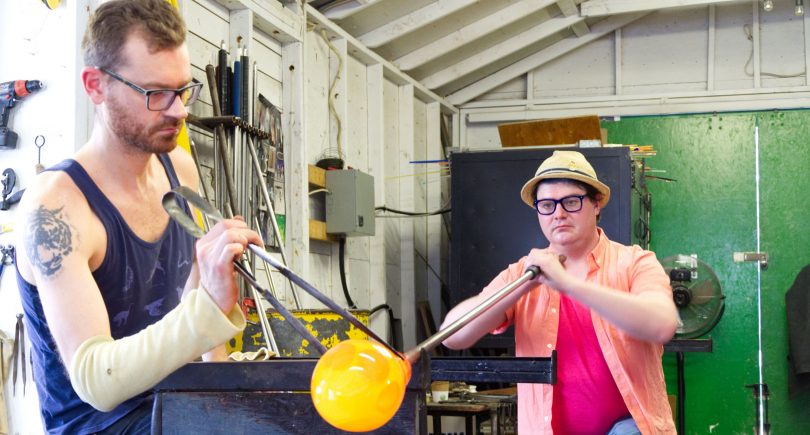 In case you were living under a rock, 2017 was a big year for Canada. With the 150th celebrations, it was difficult to avoid examining our nation, our environment and what it means to actually be Canadian.

With Canada under a microscope, Ryan Fairweather and Phillip Bandura instead took a trip through the looking glass. On the other side, the artists behind Calgary’s Bee Kingdom Glass found Tuponia, an alternate Canadian reality they are exploring in their new show at the Ruberto Ostberg Gallery.

Inspired by Alice In Wonderland, The Never-Ending Story and a dash of Brave New World, Bandura and Fairweather have crafted a fantastical body of work that populates an alternative northern land where marshmallows have feelings, paranoid Ghost Yetis reside in the forest, and the elusive, majestic, Moosacorn roams free. 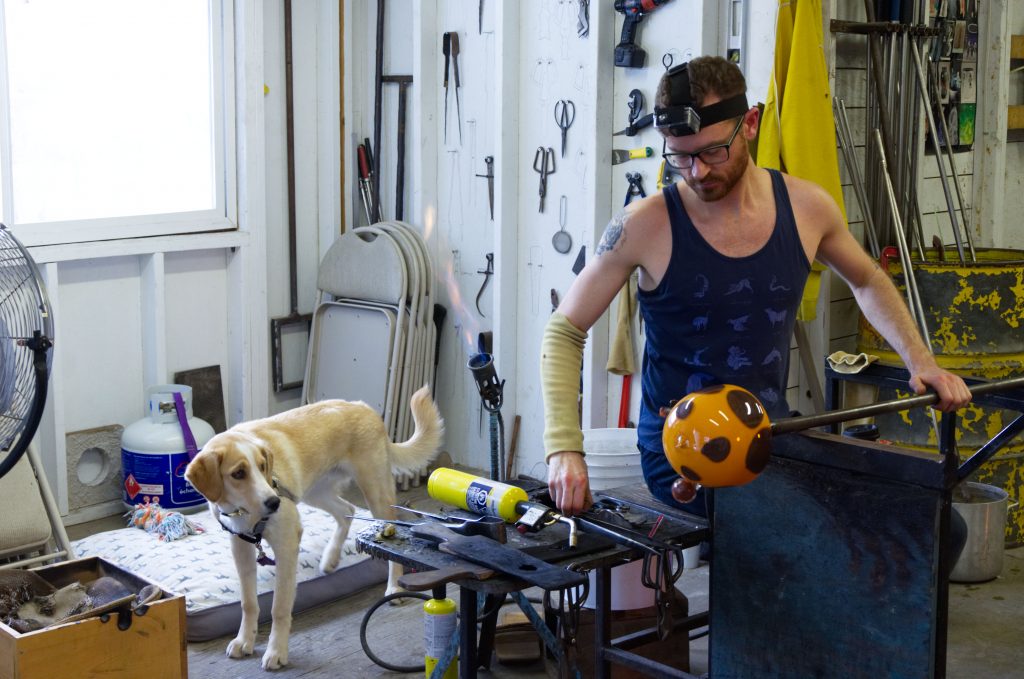 Fairweather’s dog Hugo is a regular supervisor at the Bee Kingdom studio.

Shortlisted as a potential name for Canada in the 1800’s, TUPONIA is an acronym for The United Provinces of North America. Fairweather stumbled upon it while researching a Canadian themed inflatable for the Beakerhead Festival. While the Tuponian, an inflatable satellite, has yet to join the ranks of the collective’s previous inflatables — The Fabulist and The Saturnian — the fantastical ring of Tuponia sparked the glassblowers’ creativity.

As Alberta College of Art + Design graduates who continued to practice their craft in Calgary, Bandura says he and Fairweather have always been influenced by their environment.

“We were looking at Canada and asking how we could amp up some of the Canadian culture and take it further into different dimensions,” Bandura says. He has developed sentient marshmallow characters that are hunted down and burned at the stake by Fairweather’s forest residents: skull-capped, unicorn-horned Ghost Yetis.

“When I think of inhabitants, I’m looking towards things that exist in Canada and the north and mythology like Sasquatch or yeti,” says Fairweather. He’s also created the most elusive Tuponian creature: the Moosacorn. Yes, that’s a cross between a moose and a unicorn.

The Bees hope to make their March 2 opening reception an interactive experience. Bandura has developed a maple syrup-based Tuponian cocktail and tied it into the Tuponian culture. “When I was thinking of the Tuponia Tonic I was also thinking of Brave New World where everyone is taking this drug soma and are basically drugged out so they can deal with reality,” says Tuponia. “[The Ghost Yetis] consume the Tuponia Tonic and because of that they also get a little paranoid.”

The Tuponia State of Mind

Bandura hopes the Tonic will get everyone into the Tuponian state of mind so they can not only see the art in its own plane, but there will also be the opportunity to roast marshmallows — non-feelings ones — and view the crowning of the Empress and Emperor of TUPONIA – special guests from drag group the Royal Court of the Chinook Arch. 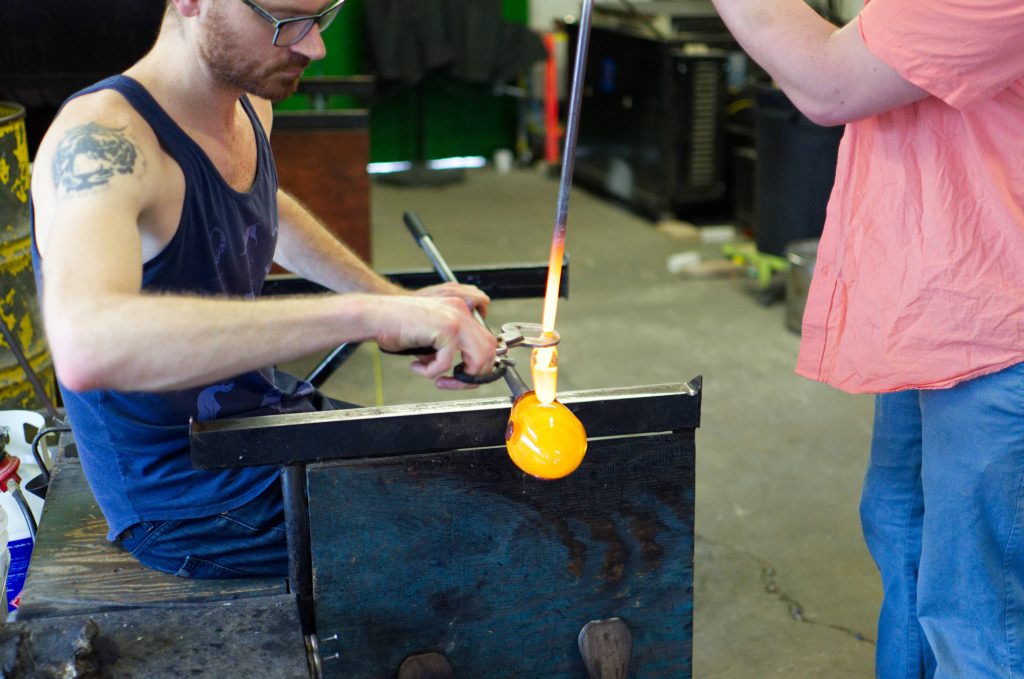 Coloured glass is dropped onto the mushroom base. 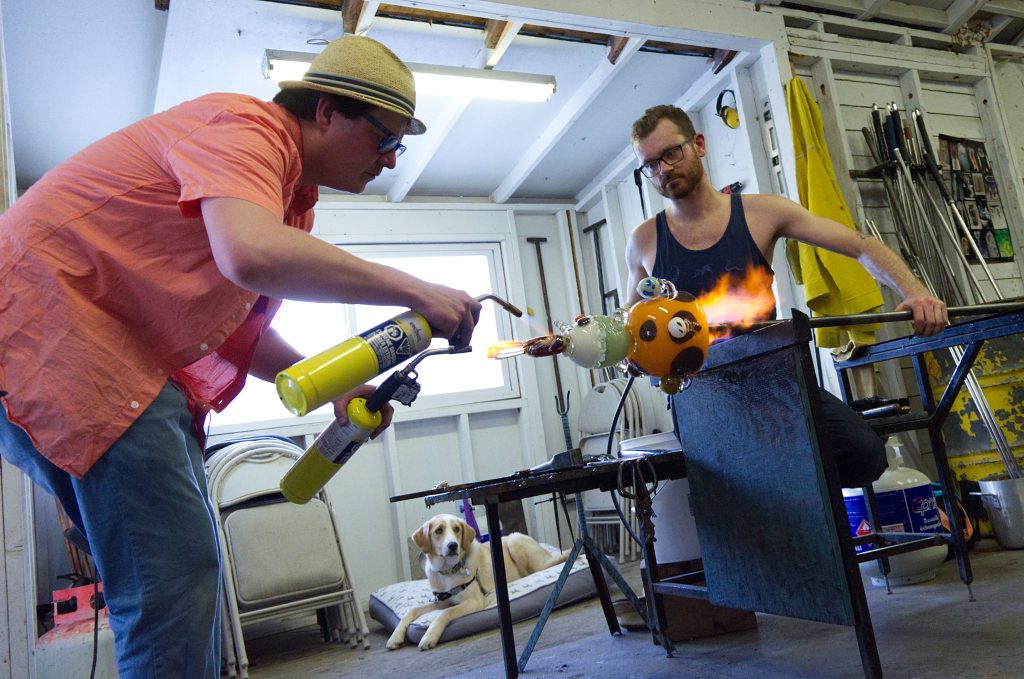 A large part of glassblowing is heat maintenance. On a larger piece such as this one, there are normally two glassblowers supporting the main gaffer or glassblower. In this case, Bandura covers for a third set of hands by using two blowtorches.

Bee Kingdom’s Tuponia runs from March 2 to March 24 at the Ruberto Ostberg Gallery. They invite guests to come in their very best Canadian/Tuponian attire from 5 p.m. to 9 p.m. for the opening reception on March 2.

Want to learn more about on of our favourite Alberta-based artists? Rachael Meckling’s feminine illustrations will have you swooning!