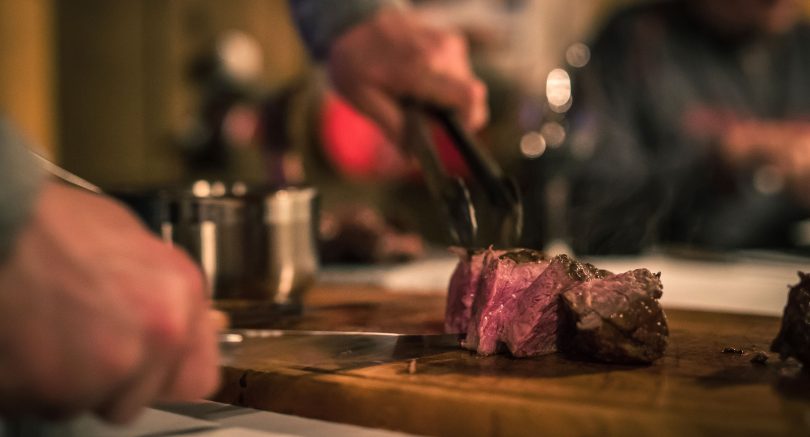 We throw around a lot of important-sounding words when it comes to our food: organic, grass-fed, regenerative, free-run. We want to take care of ourselves, something that shows in a growing number of Canadians seeking a healthier lifestyle. But as much as we seek a healthy lifestyle, millennials are more often seen in restaurants than we are cooking at home.

While the farm-to-table concept might make us feel warm fuzzies about the meat we cook at home, who’s taking care of us while we’re out dining with our friends?

Community Foods Wholesale Meats is a venture started by Taras Foremsky, along with his expert meat-selling father, Wally Foremsky. And honestly, this naturally-raised meat wholesaler is the real MVP of over 100 Albertan restaurants – from Craft Beer Market and Deane House to Modern Steak – who buy from Foremsky for their customers.

After having lived and played hockey in Europe — where meat must be raised naturally by law (no steroids, antibiotics, hormones) — Foremsky realized an opportunity to bring the same quality back home. And when chefs became customers looking for wholesale pricing on the meat he was selling, he took it a step further when, at 29-years-old, he started Community Wholesale.

Foremsky works to create personal connections between restaurant chefs and the product he sells, going as far as bringing the producer to his meetings saying, “they want to meet the farmer!” And when a chef knows where their meat is coming from, they can pass that information on to consumers to help them truly enjoy what has been prepared on their plate.

Foremsky looks forward to being part of Calgary’s most meat-centric event, Brewery & The Beast, as one of the biggest meat providers. He says Wholesale will provide meat for somewhere between 40-45 participating restaurants on Sunday, August 19th.

When asked how much meat will be used, he pauses to do the math; “There’s probably 4,000 lbs of local natural meat going out — that’s a rough estimate.”

The work doesn’t make him think twice, however, saying he is excited to walk the grounds and taste what everyone cooks up, for himself. “This is the best event,” he says of Brewery & The Beast. “Nobody even comes close.”

Whether you’re out for dinner, at the grocery store, or choosing the foodie events to participate in, Foremsky says being a conscious consumer is key. “Do your research.”

Brewery & The Beast hits the grounds of Fort Calgary Sunday August 19, 2018 from 1PM-4:15PM. Check out more about the event here.

Want to see what RickyZayshley — one of the editors of Vern — can’t live without? Read more here!