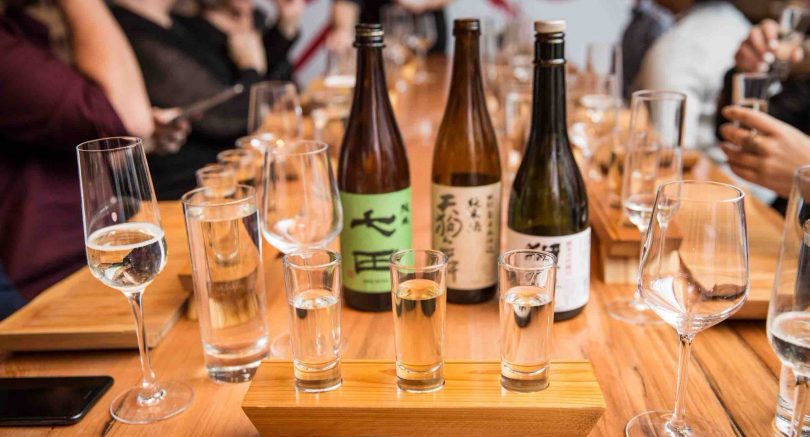 There’s something to be said for entering a dining experience with little knowledge of what you’re going to encounter. This was how I felt going into the Omakase Experience at Goro + Gun. Omakase, the Japanese restaurant equivalent of a chef’s table dinner, meant my fellow diners and I were at the mercy of Chef Tomo Mitsuno.

With seven years at a Michelin-starred restaurant in Osaka under his knife, none of us had any issue with his taking the lead. But it wasn’t the individually prepared pieces of sushi where I thought I would be in the dark. Instead, it was the sake pairings accompanying Chef Tomo’s work where I was concerned. 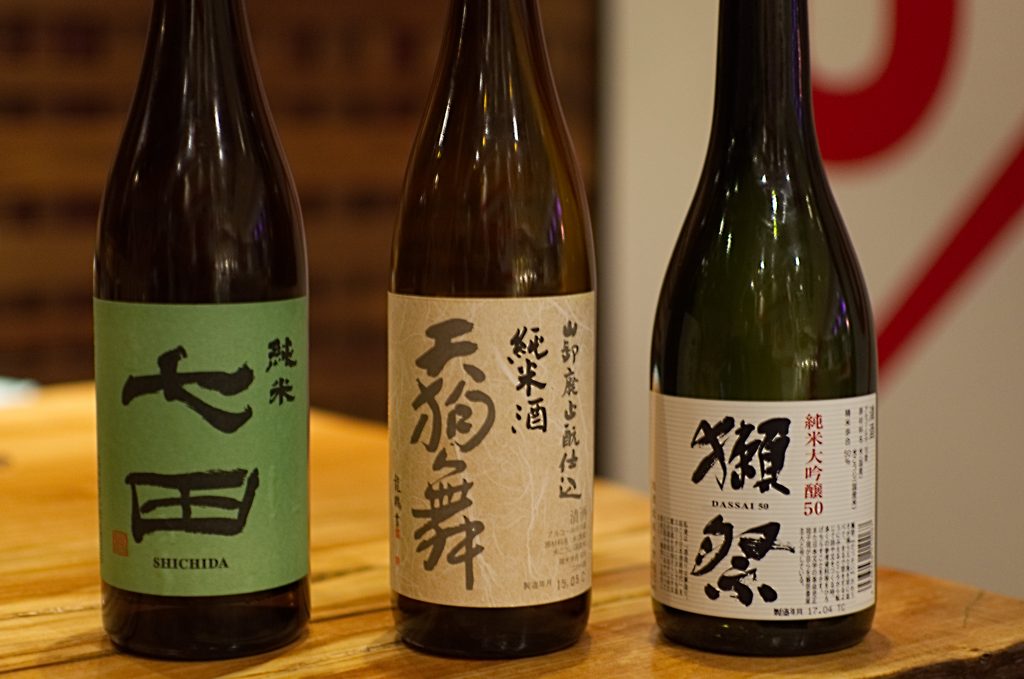 (From left to right) The fruit-forward Tenzan Shichida Junmai, the earthy and dominant Tengumai Yamahai Junmai and the easy drinking Dassai 50.

I’ve never been one for the brewed rice wine. Sips of the warm alcohol – a component of sake I always found to be quite strange – reminded me of mild bar shots of vodka or tequila. I never got the sweetness or flavour I would expect of a wine. I knew I must be approaching the drink in all the wrong ways but, with Japanese meals few and far between, I never had the opportunity to explore how sake should be appreciated. That is, until I had a proper guide in Goro +Gun‘s General Manager, Amane Kanai.

Kanai began by explaining while many restaurants will serve sake warm, it would never be presented that way in sake brewing competitions. The heat masks the aroma and flavours of the drink. When served cold, there’s no faking the quality.

Before beginning our meal, Kanai introduced the table to the three (of 30 available at Goro + Gun) sakes poured into the tall sipping glasses perched on little flights at the centre of our place settings. The first was Tenzan Shichida Junmai, a clear sake on the left side of the flight. Smooth, tropical and fruit-forward, this was already a departure from my prior experience with sake, which Kanai hit home by warning us of the Shichida’s “dangerous” drinkability.

On the right, we had another clear sake, the Dassai 50. This particular sake, Kanai informed us, was presented by the Japanese president to Obama on his visit to Japan. Its popularity is such there are sorbets and chocolates modelled after the flavour and it was easy to see why. With sweet grape notes and fruity tones rounded off by hints of anise, this sake proved to be even more drinkable than the previous and was immediately the party’s favourite.

With these two alone I could easily become a sake fiend, but prior experiences with the drink came flashing back with the middle glass. The slightly golden Tengumai Yamahai Junmai was met with mixed reactions, mostly negative. One fellow diner described the it as “a wine that’s gone off.” Not a ringing endorsement, to say the least. Kanai invited us to revisit this one with food because, well, “food and booze go well together” as noted by another at the table. 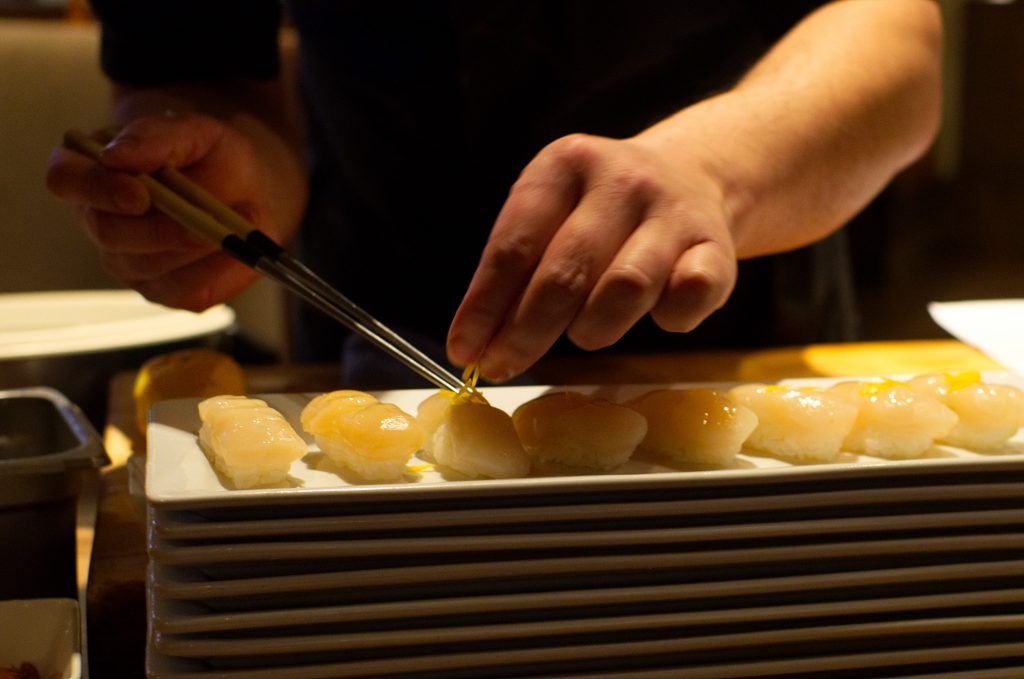 The delicate Hotate, or Japanese scallop, garnished with sea salt, konbu, Yuzu juice and a Yuzu zest paired perfectly with the popular Dassai 50.

Presented one at a time, Chef Tomo’s sushi was placed in front of us with nothing to accompany it except for palette cleansing ginger and our flights of sake. Aside from what was used by Chef Tomo, we were barred from masking the flavours with soy sauce or wasabi. Chopsticks were also out of the equation and each piece was eaten by hand. The first piece, a Hotate, or Japanese scallop, garnished with sea salt, konbu, Yuzu juice and a Yuzu zest was so delicate it only made sense to pair with the light and drinkable Dassai. 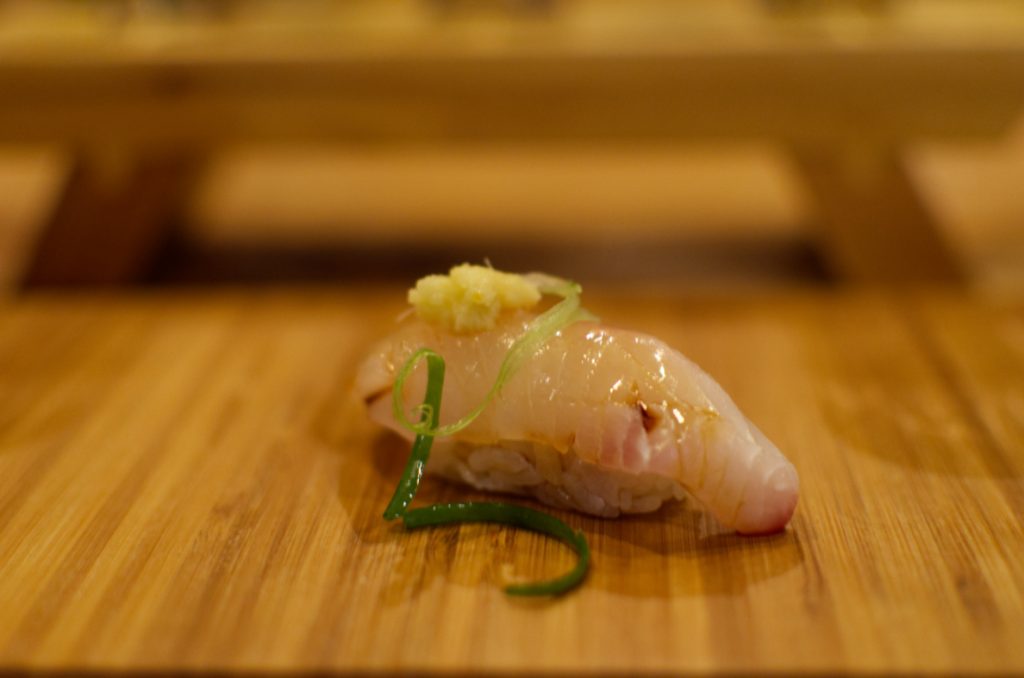 The Shima Aji, or mackerel, with soy, ginger and green onion brought out the earthy and nutty flavours promised in the Yamahai. The only soy sauce permitted was what Chef Tomo used in preparing the sushi.

Kanai, however, wasted no time encouraging us to return to the Yamahai when presented with our second piece, Shima Aji (mackerel) with soy, ginger and green onion. Reluctantly taking a sip, the earthy notes of mushroom and the nuttiness of the wine Kanai had described when introducing the sake rang through and played counter to the ginger’s spicy heat.

As we were presented with piece after piece, the table’s taste for the previously denounced Yamahai began to pull ahead. When Chef Tomo’s sous chef informed us the empty wine glass at our setting was intended for us to pour some of the bolder sake in, there was even more of a reason to love it. 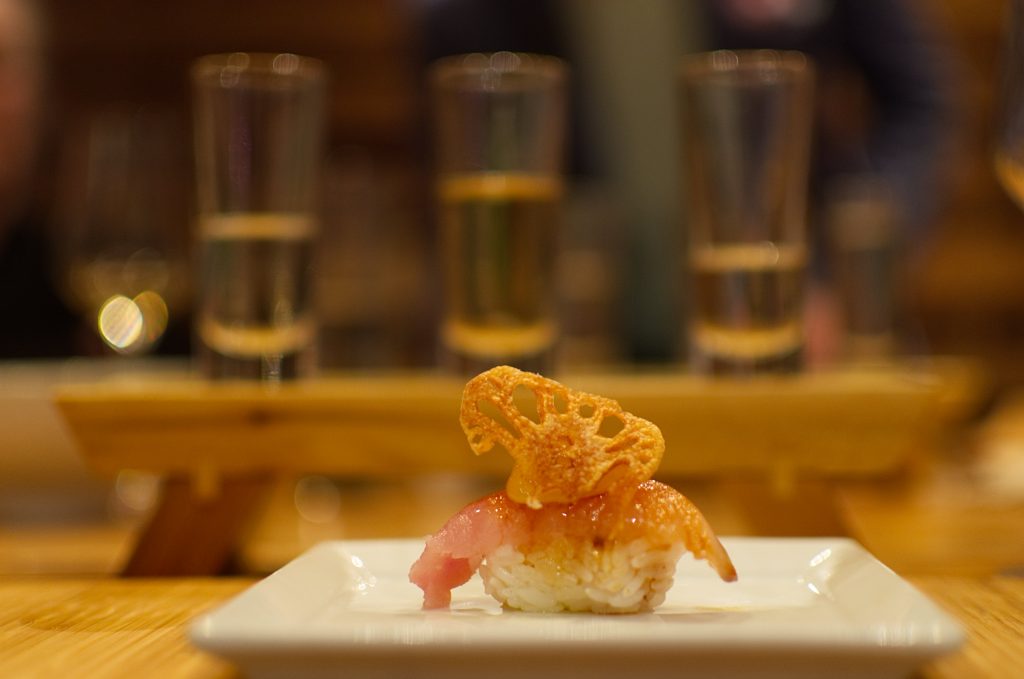 The white tuna prepared with soy, a soy marinade egg yolk, truffle oil and topped with a Gobo chip was the perfect flavour profile to accompany the Tengumai Yamahai Junmai.

Paired with a piece of white tuna topped with an egg yolk and Gobo chip, of which the flavours reminded me of a tartare, the Yamahai was almost necessary so as not to be outshone by the richness of the food. By the end, I felt more inclined to drink this over the other, sweeter sakes. The Dassai and Schichida’s profiles worked well with the salt and umami flavours of the sushi, but I found myself returning to the Yamahai time and again.

While I’m far from shopping the sake aisle of my local liquor store, the Goro + Gun Omakase Experience opened my palette to confidently ordering sake the next time I venture out for sushi. Hopefully with suggestions as perfect as Kanai’s, of course.

Looking for the perfect spot for Valentine’s Day? Check out our dining guide for every type of relationship.